It was four days after President Donald Trump had nominated Amy Coney Barrett to succeed Ruth Bader Ginsburg to the U.S. Supreme Court. The national conversation had quickly focused on Barrett’s ties to People of Praise, a charismatic Christian religious group that holds men are divinely ordained as the “head” of the family and faith. Conservative Christians and anti-abortion activists praised Barrett’s nomination as a win.

Ajiduah, a 17-year-old Black Catholic, felt that her kind of Catholic was being overlooked. She was shocked and comforted when thousands who felt similarly unseen and misrepresented engaged with her tweet. Trans, Latino and Black Catholics connected from Chicago, California, Washington, D.C., and as far away as Australia.

“I was just trying to figure out how I can be a Catholic in leftist sort of spaces,” said Ajiduah. “There are a ton of people who are in my same situation. It felt really nice.” 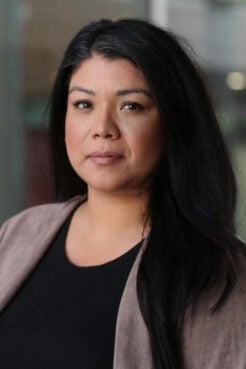 This week’s Senate hearings may have the effect of centering Barrett’s conservative Catholicism, which is strongly anti-abortion and opposed to same-sex marriage, as the “true Catholicism,” a notion that Daisy Vargas, a University of Arizona professor who specializes in Catholicism in the Americas, said erases the “diversity of Catholic communities and their experiences.”

For Vargas, there is nothing abnormal about being pro-choice, for instance, and a practicing Catholic. She points to former Vice President Joe Biden, Justice Sonia Sotomayor and “almost half of all U.S. Catholics” who support a woman’s right to choose.

Characterizing those who are anti-LGBTQ, against abortion and who lean conservative as the definition of Catholicism, in addition, promotes a model of Catholicism that is largely white and excludes Black, Latino, Asian American and other “minoritized” Catholic communities in the U.S., Vargas said.

Romero Orozco’s Mexican identity is deeply linked to his Catholic faith, as is his work as the executive director of the Pomona Economic Opportunity Center, a non-profit that helps support day laborers. He supports abortion rights and same-sex marriage. He said learning about Catholic theology, including the first- and second-century writings about Jesus, has helped him remain rooted in the faith.

What Romero Orozco, 36, finds disheartening is the “lack of moral compass” he encounters in social media spaces that touch on the “true meaning of the Catholic Church.” 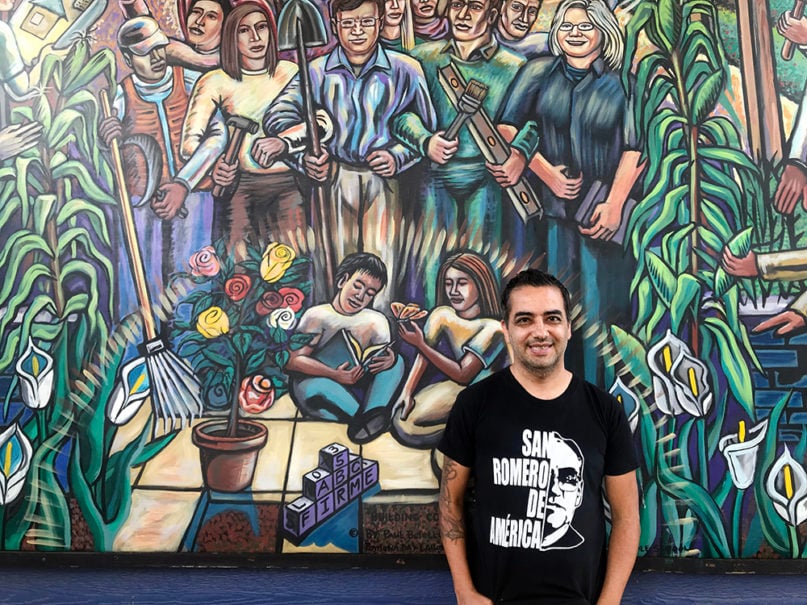 Fernando Romero Orozco stands outside the Pomona Economic Opportunity Center, where he is the executive director, Thursday, Nov. 7, 2019, in Pomona, California. Romero Orozco, wearing a shirt emblazoned with the image of St. Oscar Romero, said his Mexican identity is deeply linked to the Catholic faith. RNS photo by Alejandra Molina

“What adds fuel to the fire is these very conservative priests and archbishops who are either very conservative or they refuse to say abortion shouldn’t be the only issue on which you should base your vote on,” Romero Orozco added.

Romero Orozco thinks of his family in Los Altos, Jalisco, which he described as a fervently Catholic region in western Mexico. While his aunts and uncles back home are against abortion, Romero Orozco said it’s not among their top five issues “when they talk about their faith or when they talk about their social justice component of the Catholic Church.”

Despite the church’s rhetoric surrounding same-sex marriage and abortion, Romero Orozco said he’s been able to “put that aside and still be able to feel a connection to the church.”

At the day laborer center, where an image of Santo Toribio — a Catholic saint believed to watch over immigrants — hangs on a wall, he says, “the work we do here at the center and all the folks that are really committed to social justice, whether they accept it or realize it or not, we are doing the Lord’s work.” 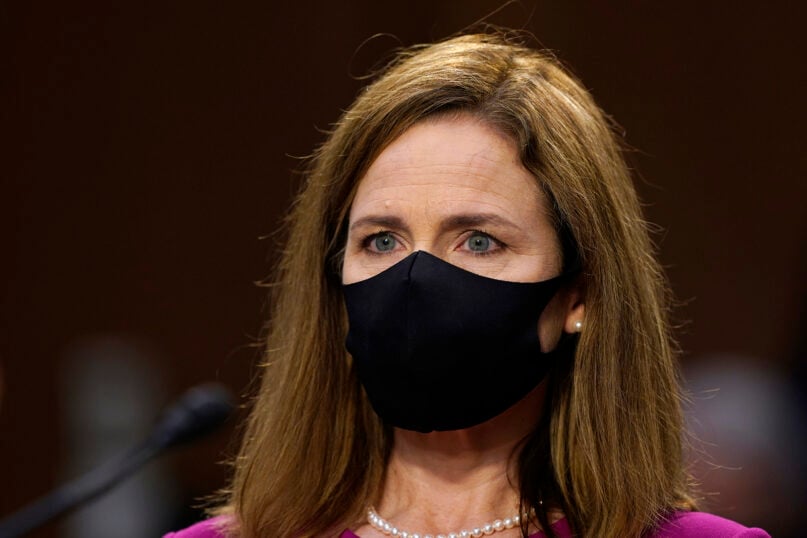 Victor Narro, a project director for the UCLA Labor Center, calls the teachings of the Catholic Church “breathing documents” that should be changed “based on what’s being embraced in society today.”

Narro, a Catholic, believes in abortion rights and that women and LGBTQ people should be able to become Catholic priests. Celibacy, he said, has become an issue that doesn’t match reality.

Narro said all Catholics have a right to call on the church to revise doctrines that the Vatican stresses must be complied with in order to be a “good Catholic.”

“I don’t feel Catholic guilt because I think it’s very sacred, for a woman to choose for her own body,” Narro said. “I don’t think the Catholic Church ought to condemn me because I believe in a woman’s right to choose.”

Narro identifies as a spiritual Catholic whose faith isn’t connected to the Catholic institution. He idolizes St. Francis of Assisi, a medieval saint who lived in poverty in order to dedicate his life to Christ. Narro said he resonates with the Catholic principles of “understanding, tolerance, kindness, compassion.”

Ajiduah said she’s inspired to remain in the faith “to figure out how Christianity should be or how it can be.”

Catholicism helped her family in Nigeria, where the church offered schools and social services that the state failed to regularly provide.

“It’s not a religion that should be used for imperialism,” Ajiduah said.

The Associated Press contributed to this report.

Pearl Harbor and the fuel that still flows