Before You Vote: An Interview with David Platt

An excerpt from Ed’s recent interview with David Platt. 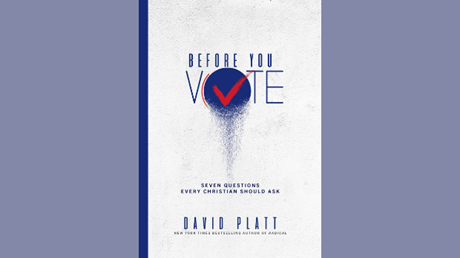 Ed: A lot of people are feeling discouraged by that toxic political culture. Why do you think believers should be engaged in the democratic process? Why shouldn’t we disengage right now?

David: I think the main reason is because we have been given grace from God that can be used for other people’s good. That’s one of the things I walk through in the Before You Vote book. We don’t have a clear command from God and scripture about voting, partly because God doesn’t address democratic elections in the first century or before that. But we do have a clear picture that when we have been given grace from God, we are to steward this for the good of others and the glory of God’s name. It’s a privilege we have to speak into who lead us and how we’re led, how laws are made, and how people are cared for according to those laws. This is a grace God’s given us. If we are told to love our neighbors as ourselves, then we’re inevitably going to think through political issues that affect people around us. I think that picture of stewardship alone compels us to say, how can I use this grace God’s given me as as a citizen in a representative democratic government of the people, by the people, for the people? How can I use this? He’s entrusted to me to glorify him and lead to the good of others. I think that’s a really good thing for Christians to think through. How do we wisely steward this grace?

Ed: The New Testament was obviously written in the time of the Pax Romana, when the Roman empire ruled. There are obviously some differences between where we are now. You mentioned specifically that the Bible does not address democratic structures and processes. Why do those differences matter?