(RNS) — A day after the subject of racism played a primary role during the Cleveland presidential debate, it was declared a religious issue at a virtual event of the Joe Biden presidential campaign.

“We know that as people of faith, racism flies in the face of the idea of imago Dei, the idea that everyone is created in the image of God with inherent human dignity and worth and value,” said Josh Dickson, national faith engagement director for the Biden campaign, as he opened a Wednesday (Sept. 30) webinar on Zoom and Facebook.

Coons described how he joined Los Angeles Mayor Eric Garcetti and Rep. Lisa Blunt Rochester, D-Delaware, at the foot of the stage before the debate began in Cleveland and, at the congresswoman’s suggestion, they started praying together.

“We spent five minutes — the three of us – just praying for humility and strength for Joe Biden, that our nation would be strengthened and clarified,” Coons said. 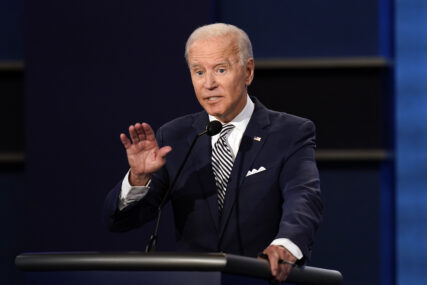 Though he said he wasn’t sure what occurred for the next hour and a half during the debate “was in any way positive,” Coons said Biden, his longtime friend, seeks to move the country beyond its “sin of racism.”

“Joe knows from his upbringing, his childhood and the nuns and priests who helped raise him that we are to love each other as neighbors,” said Coons, who won Biden’s seat when Biden became vice president in the Obama administration. “Joe is someone who in his heart gets that every one of us has a yearning, a hope and a dream that we will yet be connected to each other and reconciled.”

Charles, known for his role on “Grey’s Anatomy,” wrote a recent Christianity Today commentary describing his “faint” hope that many white evangelicals will work toward racial equity.

“You’re actually pushing a whole generation of people away from the church,” he said, addressing white evangelicals, during his webinar remarks. “You may win the certain culture war issues in the short term. But in the long term you’re setting up a further exodus of the church that will be felt for generations.”

Wallis, for his part, said he had endorsed the Biden-Harris campaign — his first presidential campaign endorsement — “because the Biden campaign was willing to make racism a religious issue in this election.”

Wallis agreed with Charles about the potential consequences of “white silence on white supremacy” in Christian circles, but he also called on people of a range of faiths to view racism as a key issue, especially after President Donald Trump declined to condemn white supremacy during the debate.

“Anybody who says they’re Christian or Jewish or Muslim better have an answer for why it’s not their essential issue in this election,” said Wallis, who leads Sojourners, a Christian mobilizing and media organization.

He facilitated the webinar conversation, which also included the Rev. Cynthia Hale, pastor of Ray of Hope Christian Church in suburban Atlanta, and Nichole M. Flores, assistant professor of religious studies at the University of Virginia in Charlottesville.

Before Hale ended the event by declaring “we are in a spiritual battle” and praying “God we pray for a win right now,” Dickson urged the participants in the virtual gathering to take paid time off in order to help the campaign in person or virtually in the battleground states.

“How will we put hands and feet to our faith?” he said after urging listeners to commit to “bending that moral arc of the universe more towards justice,” echoing a phrase once intoned by the Rev. Martin Luther King Jr. “I’m asking you all right now, take time off. If you have PTO, this is what you have PTO for.”