MUMBAI (RNS) — In India, the country with the world’s second-largest Muslim population, jihad can come in many forms. At least, that’s what the Hindu right would have you believe.

The transformation of the term jihad — which in the Islamic Scripture refers to “struggle” or “striving” — into a specter of Islamic takeover began a decade ago in the southern states of Kerala and Karnataka, when Muslim men were accused of mounting an organized campaign to lure non-Muslim women into marriage and force their conversion to Islam. The alleged campaign was dubbed a “love jihad.”

Though local authorities investigating the rumors found no evidence of targeted conversions, the term quickly settled into the Hindu nationalist vocabulary, and the allegations have persisted to this day. As recently as February, the Hindu nationalist home minister was forced by a member of parliament representing Kerala to admit that no cases of supposed love jihad had been reported in the region.

Nonetheless, invented jihads have proliferated: History jihad supposedly glorifies the Mughal period of Muslim rule, while film and song jihadists are accused of using movies and music to glorify Mughal rulers. Media jihad employs paid media to speak in favor of Islam. Education jihadists supposedly promote the use of Arabic. The most insidious may be victim jihad, in which Muslims are suspected of playing the victim.

Earlier this year, Sudhir Chaudhary, a primetime anchor on Zee News, a widely watched right-leaning Hindi news channel, was investigated for insulting religious beliefs after broadcasting a segment on a “jihad chart,” lifted from propaganda websites, that purported to “decode” the supposed ingenious subtypes of Muslim holy war.

Chaudhary later backtracked, explaining on air that jihad in the Quran refers to a “pious fight” and noting that “the meaning of jihad has always been presented to us in a wrong manner.” 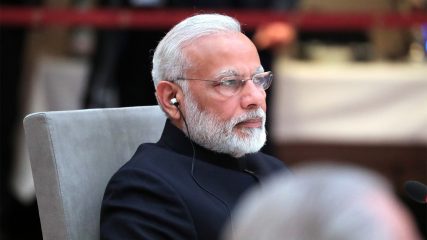 Indian Prime Minister Narendra Modi at a meeting in Hamburg, Germany, on July 7, 2017. Photo corutesy of the Kremlin

But the concept appears to be irrepressible. This month, Uttar Pradesh, India’s most populous state and one governed by the Hindu nationalist Bharatiya Janata Party, announced new plans to probe recent interfaith marriages for signs of love jihad. “In the last decade not just Hindutva groups, but institutions of the state have started using the phrase,” said Mohan Rao, a former professor at Jawaharlal Nehru University, who has written on the phenomenon.

The idea that Muslims are encroaching on Hindu-dominated cultural and economic spheres would be laughable, if it were not so dangerous. Days before India’s nationwide lockdown was imposed in March to control the spread of COVID-19, a Muslim religious meeting in Delhi set off accusations of “coronavirus jihad” after several attendees tested positive. The hashtag “#CoronaJihad” began trending on social media, spurring attacks on Muslims in and around New Delhi.

The police, who detained or investigated several foreign attendees with visa violations, contemplated homicide charges against some who had contracted the virus. Several of these cases have since been dropped or dismissed.

“Whatever it may actually mean, in the common perception a jihadi is a terrorist, and the Indian right-wing keeps using that term to demonize Muslims,” said Pratik Sinha, founder and editor of Alt News, a fact-checking site that has debunked love jihad stories in the past. “The larger narrative is that Muslims are trying to take over every aspect of the system.”

Sectarian violence has erupted periodically for decades, but hate crimes against Muslims have risen since 2014, when the Hindu nationalist BJP came to power. Far from quelling the disorder, Prime Minister Narendra Modi has maintained an apparent indifference to it, and elected lawmakers from his own party have made hateful statements. A contentious amendment to India’s citizenship law, passed by Modi’s government in 2019, has further sparked fears of disenfranchisement among Muslims.

“Such (sectarian) sentiments were there earlier, too, but have gained greater force since 2014,” said Maulana Mohammed Hanif, a social worker and community leader in Alwar, in the western state of Rajasthan, which saw a spate of lynchings of Muslims three years ago. “There is no leadership strong enough to fight these issues and oppose these rumors,” he said. 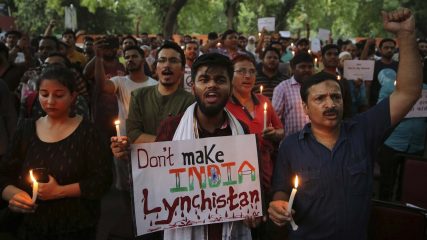 Fears of a Muslim takeover also appear to be animated by demographic changes. Muslims make up 14.2% of the population, according to the most recent nationwide census, up from 13.4%, as the Hindu population has fallen to 79.8% from 80.5% in 2001. Statistics like these have strengthened right-wing calls for population control.

The fake jihad trend has also been tied to insecurity about land. One member of a panel investigating a violent clash in Bangalore described “a pattern emerging in India” connecting such incidents (allegedly fomented by Muslims) to drops in local property prices, followed by an exodus of Hindus. The investigator alluded to “a grand design” by “vested interests,” though he clarified that he was not referring to Muslims in general.

But the most immediate force behind suspicions of Muslims may be social media, particularly the seeming symbiotic relationship between Twitter and the jihad phenomenon.

In August, the social media company told the high court of the southern state of Telangana that it had removed #CoronaJihad and other hateful hashtags. “We need long term remedial measures,” said Khaja Aijazuddin, the lawyer who has pushed for greater regulation of social media and who filed the petition against four state authorities and Twitter. “It was a pre-planned conspiracy by right-wing elements to defame a particular community.”

Media companies and others are fighting restrictions, claiming that they are defending free speech. A case now being argued in India’s Supreme Court concerns a television program about an alleged “UPSC jihad,” referring to a supposed Muslim infiltration of the country’s civil service. (Despite their 14% share of the population, Muslims in fact constitute just 5% of workers joining the public sector last year, up from about 3% five years ago.) A broadcast of the show was initially permitted and then restrained after the initial episodes were found to have misleading and hateful content.

It’s an indication of the “jihad” mentality that a slight rise in the number of Muslims accepted into the UPSC is not seen as progress in curbing discrimination against the Muslim minority but a conspiracy against a Hindu majority that appears determined to institutionalize its cultural dominance.

“They end up feeling deeply defensive and stigmatized,” said Rao, the former JNU professor, of the impact of rising Islamophobia on India’s Muslims. “The language being used normalizes excesses against the community and strengthens the false idea of the rapacious, violent Muslim.”

Evangelical hobnobbing at the White House spreads more than the Gospel

Evangelical hobnobbing at the White House spreads more than the Gospel