LOS ANGELES (RNS) — Faith leaders and activists demonstrated outside prisons and immigration detention centers across California on Tuesday, calling on Gov. Gavin Newsom to do more to release incarcerated and detained people who they say are in danger amid COVID-19 outbreaks.

Organizers held and placed banners denouncing Newsom at freeway overpasses and outside prisons. Activists posted banners outside prisons that read the “Gavin Newsom COVID-19 Death Camp” and “Department of Infections and Debilitation.”

The “Banner Drop Day of Action,” hosted by a coalition of immigrant rights and faith groups, was held a day after a group of women and faith leaders completed a five-day hunger strike to call attention to the detention of two pastors and other immigrants at the Adelanto ICE Detention Center, where a number of COVID-19 cases have been reported. 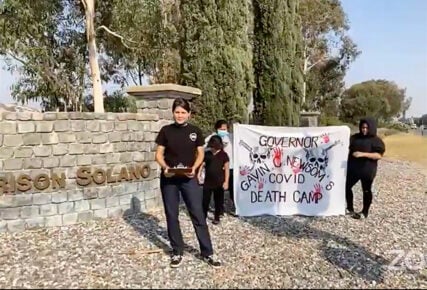 Activists demonstrate and broadcast outside of California State Prison Solano during a virtual conference. Video screengrab

“Instead of being allowed to go home to their families, they’re brought to this building by ICE, processed like a commodity, then shipped to ICE detention facilities all over California and even to other states,” Lee said.

“As people of faith we call for compassion, mercy, clemency, release and an end to ICE transfers,” she said.

Representatives with the Kehilla Community Synagogue from Oakland also participated, saying “As Jews our Scriptures teach us that every life is valuable.”

Organizers with Clergy & Laity United for Economic Justice attended a rally outside the Adelanto ICE Detention Center, where immigrant pastors Hugo Rolando Gómez and Allan Altamirano have been held for more than a year.

Jael Serrano Altamirano told the Spanish language newspaper La Opinion that her husband, a Riverside pastor, suffers from a heart condition. She said he was returned to the Adelanto facility after he was hospitalized for a week.

“We’re scared because his condition puts him at high risk of getting the coronavirus,”she told La Opinion.

A U.S. district judge recently scolded ICE and the private prison company that operates the Adelanto ICE Processing Center for its “inadequate and objectively unreasonable” response to the COVID-19, according to the Desert Sun. The judge said the facility failed to provide adequate social distancing or timely testing. Activists are also protesting plans to expand the Adelanto facility.

From the beginning of the pandemic through the end of August, Cal Matters reported that California was expected to release more than 11,000 prisoners early. These prisoners include largely nonviolent offenders with less than a year to serve, according to the news site.

Emmy award winning priest on the art of preaching