(RNS) — The Southern Baptist Convention’s publishing arm, LifeWay Christian Resources, on Wednesday (Sept. 30) decided to drop a suit against its former president and CEO that accused him of violating a noncompete clause in his contract.

Earlier this week, the chairman of LifeWay’s board of trustees explained in an email that the organization was suing Thom Rainer, who stepped down as CEO in 2018 but is continuing to serve as chief advisory officer until the end of October 2020.

The email explained that Rainer had signed a multibook, multiyear agreement with Tyndale, a competing Christian publisher, in violation of a noncompete clause in his contract.

But on Wednesday, Todd Fannin, the board chairman, issued an update saying that “both parties are currently exploring the possibility of an agreed upon resolution of the differences.” 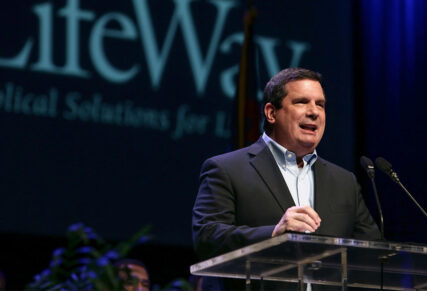 The reversal followed an email from former board chair Jimmy Scroggins, pastor of Family Church in West Palm Beach, Florida, who said he was disappointed the full board was not consulted before the suit was filed and said he thought there were better options available for resolving the dispute with Rainer.

A meeting of the full board was initially scheduled, then canceled.

Rainer, a prolific writer who also runs a business called Church Answers, said he had received a written and amicable release from publishing with LifeWay on Oct. 1, 2019.

Rainer said Thursday he began returning his salary four months ago at the request of new CEO Ben Mandrell because of LifeWay’s financial challenges.

“At this point, I have not been notified that the suit has been officially dropped,” Rainer said in an email to Religion News Service.

Under terms of Rainer’s transition agreement, he was prohibited from working with a competitor for 12 months after his retirement.

On Monday, LifeWay filed suit in chancery court in Williamson County, Tennessee. The suit said a violation of the agreement Rainer signed with LifeWay would cause “irreparable harm” and that damages “are not an adequate remedy.”

Pence hopeful the Supreme Court will restrict abortion in US