Suicide, complicated grief and the hidden darkness of the heart

I’m speechless, essentially. And it feels like a triple shock: there’s the sudden death, and the fact that it was a suicide, and the additional bombshell that apparently Tom has been accused of abuse.

I had utterly no idea, and as I read the allegations that are now surfacing I’m experiencing a complex series of emotions I can barely begin to process.

Here’s what I do know. Tom was very involved in the Mormon Studies world, first as a bookseller for Deseret stores and then as a publishing professional with Signature Books in Salt Lake City.

It was during his Signature years that we became friends. I was working as an editor at Publishers Weekly, and Tom was my marketing contact at the press. We bonded over books and our shared love of history, and I ran into him regularly through the years at conferences like the Mormon History Association and Sunstone, long after we’d both moved on to other jobs.

Tom went through a very rough patch at one point, and I didn’t know much about the details. A faith crisis, a divorce, a career change. He landed here in Ohio a few years ago, working as a tour guide at the Kirtland temple and going back to school. In 2017 he gave me a once-in-a-lifetime tour of the temple, which he called “Grandmother.” This is the entry to the cupola at the very top of the building: 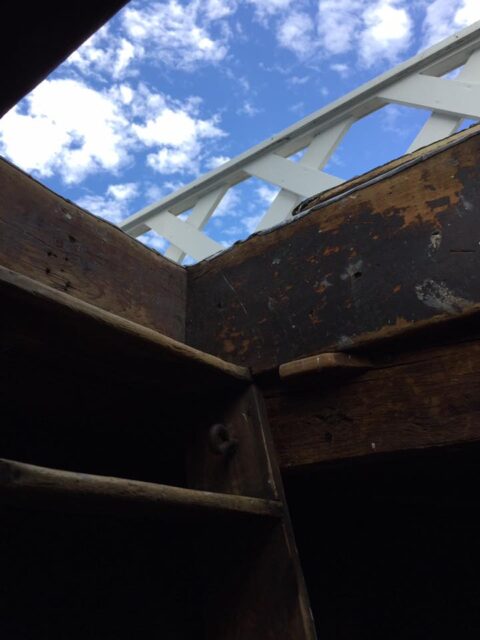 The steps to the top of the Kirtland temple in Kirtland, Ohio.

And this is me after reaching the pinnacle and enjoying the gorgeous 360-degree view while also clinging to the “iron rod” that kept me tethered to the temple. 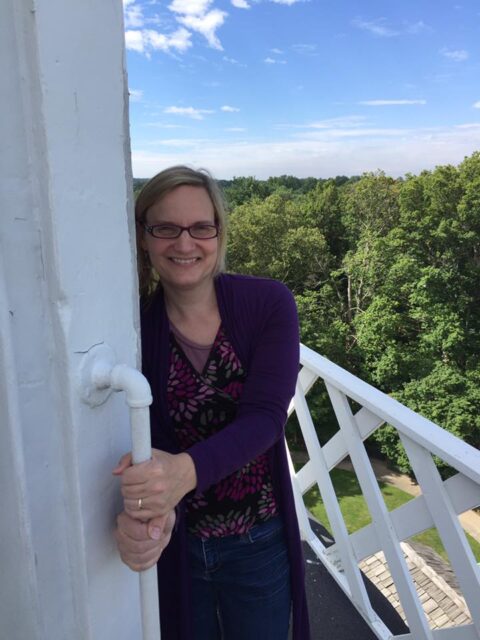 As a longtime acrophobe, it was no small thing for me to brave the heights, and I appreciated that Tom never mocked my fear.

When he gave tours, whether his audience members were Mormon or Community of Christ or other, he emphasized that “Grandmother” had given life to all of the various Restoration traditions that traced their history to Joseph Smith, and it was our job to work together to take care of her now that she’s nearing her bicentennial.

Not long after that, Tom got remarried on the temple grounds, and it was encouraging to attend the wedding and see that his life seemed to be back on track. I was happy for him.

Yet it seems there was far more turmoil under the surface than I ever guessed. Tom was not the person I thought he was, or at least he was not only that person; alongside the flamboyant history lover was a shadowy individual I never saw.

I, of all people, ought to be aware of the hidden darkness in families. Tomorrow marks the tenth anniversary of my father’s death, a story I told at the end of my memoir, “Flunking Sainthood,” and won’t rehash here. My dad didn’t kill himself, being too much of a narcissist to recognize or esteem the pain he had caused other people. By the time he died we had not had a relationship for many years, which was his choice when he left our family.

Still, I had deep wells of unexpected grief. Grief for the dad I had known, who had made a mess of his life and died so friendless, and grief for the relationship we could have had if he had not been mentally ill. Anger for the way his specter continued to cast a shadow over my own happiness and the family I’d created for myself as an adult.

And also, unexpectedly . . . grace. Forgiveness. Gratitude that he could finally rest in peace despite the pain he had caused others. That grace absolutely did not come from within me; it wasn’t something I engineered. It was a gift from heaven.

That’s not to say I didn’t continue to feel anger. My husband summed this up for me beautifully when we were picking out a headstone. We commissioned the real headstone, as you can see here, and he also Photoshopped an alternate grave marker that we didn’t use but that brought me laughter and catharsis. I like this depiction of the two of those headstones sitting side by side. It’s a reminder to me of the complexities of love and violence — how those left behind after the death of a particularly troubled person are left to make sense of that person’s senseless-seeming and destructive behavior.

As Tom’s victims try to parse their relationships with him, I hope they find justice in having their stories be honored and believed, and peace from knowing those stories won’t define them forever.

And Tom, I pray that you find peace, too. God be with you till we meet again.

Rihanna’s hadith fashion show moment has some asking: Is Islam too sacred for art?